Did you know that your cycling kits do more than just give you a better cycling experience? Yes, cycling kits tell stories! So every time you are out cycling, it means that the other cyclists around you can use your gear to get to know you as a cyclist. There are so many different cycling kits out there, and each one can define you as a cyclist in their own way. Like every sport, cycling also has its culture and its own set of acceptable practices. So we advise you to be a tad bit careful with the cycling kit you wear as they say a lot about you. In this article, we will decipher the cycling attire code and tell you what your choice of attire has to say about you.

As a general rule, team kits should only be worn if you are a member of that particular team. Wearing a team kit is frowned upon if you are not a team member and makes you look silly. It is not entirely wrong even if you are wearing a team jersey on a casual ride, but the preferred way is to wear your own club's/team's cycling kit.
However, if you insist on wearing your favorite club's team kit, make sure you do it properly! Don't wear the jersey of one team and the shorts of another! Be coordinated when you plan on wearing team kits. Because if you are doing it, you might as well do it in style!
There is nothing wrong with wearing cycling kits of former teams, though. In fact, wearing an old team's jersey can be a tribute and respect to the history of cycling. So wearing a Festina jersey might be a good thing. Earning a Leader Jersey is no child's play. Imagine working years to achieve it and seeing some amateur cyclist wearing it on the road. You wouldn't like that, would you? So why do it to someone else? Wearing a leader jersey or kit without earning it just makes you look childish.

Also, wearing a yellow or polka dot jersey also sends out a signal to race you! You unknowingly tell people that you are the best of the best on the road. Before you know it, you will have multiple cyclists ready to race you and try to compete with you. So unless you are prepared for that kind of competition, stay away from Leader's jerseys.

Kits with flashy prints and vibrant colors show riders who are there to make a statement. You'll find these groups of cyclists trying to be different and louder than the others. If you intend on making a statement, wearing flashy prints is a fool-proof way of doing that. 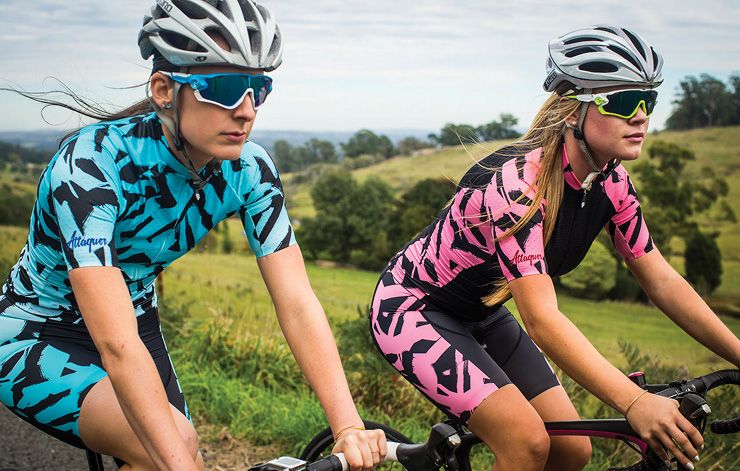 Wearing basics is a way of showing that you're not here for making a statement or that you're as minimal as possible. Cyclists who only care about the sport and would rather have a plain, uni-colored cycling kit are very competitive. Watch out for these guys! You can't underestimate them.

Wearing dark black and riding alone means that you are a cyclist who prefers staying in the shadows. These cyclists are here because cycling is their passion. They're not interested in making statements. Cyclists like these are silently telling people, 'If you want to race me, go ahead, but it doesn't matter much to me. But when a race does start, these cyclists are like tigers ready to pounce. Don't underestimate the power of all black!
But wearing plain black or just a single color does not mean stealth always. Sometimes, they love their bike's frame. And when the bike's colors are flashy and unique, the cyclist prefers not to ruin the vibe and stay minimal to let the bike shine.

Usually, wearing something comedic means that you are just there for fun. There are always people who are there to watch and cycle for only a few minutes, but honestly, they are here for fun. They might not take themselves too seriously, or they may be expert players who are tired of competition and want a day of fun.
In any case, comedic cyclists are not to be taken lightly. While they are there to make you smile, some of them might make you cry when it comes to racing them! So if you see cycling wearing a jersey with cats printed all over it, he's just there to show you he loves cats. But you'll have to race him to see where he stands as a cyclist!

At many times, you will see high-performing cyclists wearing the best gear there is. With weatherproof kits and the best aerodynamics, you can confirm that these cyclists are the ones most passionate about their sport. The sheer quality of their cycling kits tells you, 'I'm here to win.
So if you're serious about cycling, then you need to have the best gear possible. You can have a look at some of the best cycling kits on Steepcycling and make yourself look like a pro.

Wearing jeans while cycling to the nearby supermarket is okay. But if you're a pro cyclist and plan to go cycling for miles and compete with other cyclists, then wearing jeans is just going to make you look like an amateur. Well, even amateurs come prepared. Jeans make you look like you really don't care much about the sport.
Also, jeans are pretty uncomfortable to go cycling in. It is so much better to invest in a cycling journey and comfortable ride for hours on end.

Wearing expensive gear like a Rapha jersey shows you are rich (obviously). But what do other cyclists think about that? Well, some cyclists might believe that you feel you're too good for them. Some cyclists might be tempted to race you to show you money can't buy skills!
But hey, if you're wearing an expensive jersey or cycling kit just for the comfort or because you like them, go ahead! If you're genuinely passionate about cycling and invest in gear out of love for the sport, then it doesn't really matter if a person or two think you're a show-off! Show them that you're good at what you do.

A T-shirt can be a comfortable attire to wear while cycling, and some might even prefer the loose-fitting cycling kits. So wearing a t-shirt to cycle is okay. But it is your lower body that has to come in contact with the bike. You can't make do without a good pair of cycling shirts.
Wearing a T-shirt will not make you look non-serious. But wearing ordinary pants to cycling indeed will! There are now plenty of cargo pants and other shorts available that are all you need to go cycling. You can substitute the jersey for a t-shirt, but we will still say that a good cycling jersey will do you good!

A cycling kit can say so much about you, so don't go about wearing just anything! Cycling is a complete culture, and you can send all kinds of messages through your attire. The roads can be a fun place, yet they can also be daunting. With the proper clothing, you can stay competitive as well as look fantastic.